Information about a product
Bestseller

Enter contact details and we will notify you, when the product is available.

This product is available in our stores

You can buy this product without placing an order online at one of our stores in your area. Check where the product is in stock. Check availability

First of instore DVDs for XBOX 360.

DVD for instore use with stuff about XBOX 360 (game trailers, TV ads).

Rare item, which every XBOX 360 collector should have in his collection.

Here is link to video, showing what's on this disk :

Tech specs:
Users reviews
To rate this product or to add a new review, you need to sign in.

One Year Warranty - Warranty is granted by the seller for a period of 12 months.

There is 12 months warranty for this item. We can fix or replace broken item within 14 working days of getting package.

Signs of impacts, removing any parts or warranty sticker will cancel Your warranty rights. 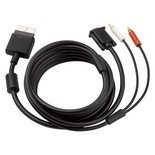